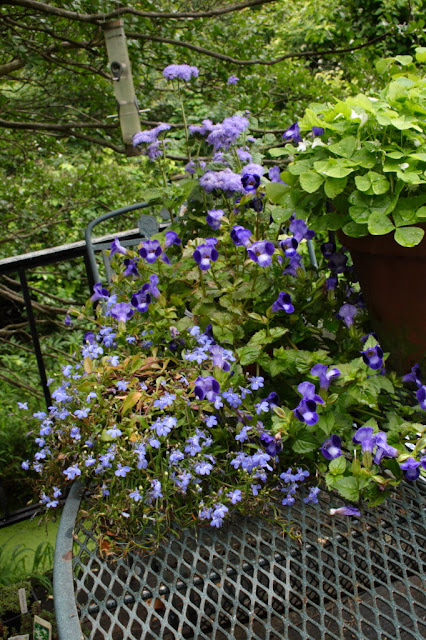 A century ago, when the European and American gardening scenes were all abuzz with the newly discovered excitement of color themed hardy perennial borders  (in contrast to the carpet bedding tradition which dominated the nineteenth century) , Americans visiting the great gardens of England came home with carefully notated lists of the plants seen there. It quickly became evident that many of those plants can't be grown here. That was the easy part. More difficult to cope with was the fact that among those plants which do grow well here, their performance under American conditions was often very different. In particular, their period of bloom was relatively fleeting. So for those planning perennial borders, even if the plants could be acquired and grown well, the desired effect was here today, gone tomorrow.


Of the color themed hardy perennial borders, the most difficult of attainment was the blue border. More than one observant wit has asked why anyone in their right mind would even want a blue border: blue is cold, for some even depressing - and isn't it ironic that the blue border is most likely to be successful in cold, northern climates. In our climate, a touch of blue is just what we want for July and August. But forget the blue themed hardy perennial border. Instead, turn to those blue flowered annuals (or, as many of them are, tender perennials) which thrive in our climate. The reliable ones which I know are all relatively small, and three favorites are shown above: ageratum, lobelia and torenia.
The torenia and the ageratum are right at home in our summer climate. The lobelia is iffy: the one shown is from the Proven Winners series and is called Laguna Sky Blue. It's on trial here: if it continues to bloom all summer, then it will be a big improvement over most of the other lobelias I've tried.
The ageratums grown here are almost always the taller sorts. Torenia is to my tastes the best of the blue annuals. Above see the three of them staged, still in the pots in which they were purchased, and tempting me to plan a small color themed blue border of tender annuals.
Posted by McWort at 8:54 AM

I haven't been able to grow lobelia, our summers are just too hot here. That is a great combination.