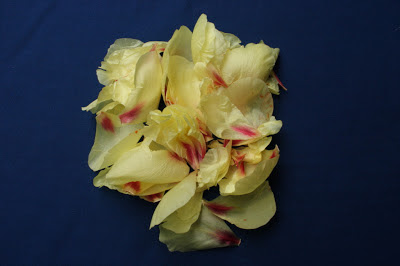 Like a pile of blood stained plumage of some gorgeously arrayed tropical bird brought down and gutted by a hawk, this disheveled heap of petals gives little indication of its former glory. Two weeks ago this was a full blown blossom of the peony ‘Yellow Crown’.  I picked it back then and put it into the refrigerator with the idea that I would remove it later for a photography session. And then things got busy. Yesterday it was still intact, but as I moved some things in the refrigerator, I touched it and it fell apart. So this is all I have to show this year for this, which might just be my favorite peony.
This plant has an interesting and confused history. It and several other similar hybrids were raised in the late 1940s by one Toichi Itoh in Japan. It is said that Itoh did not live long enough to see any of the several hybrids he raised bloom. His wife sold them to an American businessman after the war. In the early 1970s the Louis Smirnow firm offered some for the - back then - princely sum of $25.00 each. That catalog might still be somewhere around the house, but the last time I looked I could not find it. I was so tempted to buy one, but I was put off by the remark that even the roots were yellowish. There is an old tradition among tree peony growers of soaking the roots in dye to produce unusual flower colors.
So I hesitated, and missed that chance. Forty years later I decided to give it another go. The name 'Yellow Crown' was appearing in catalogs now and then, yet the price was very off-putting. And then there were the rumors circulating which claimed that the names of the several plants Smirnow bought had over the years been jumbled. For that matter, I don't know if the name 'Yellow Crown' was Itoh's name or one made up for the English speaking market by the Smirnow firm.
Peony enthusiasts eventually added more confusion to the story by deciding to call all Interdivisional hybrid peonies Itoh peonies. But Itoh himself raised only those few original cultivars. Other hybridizers soon were able to duplicate Itoh's work, and now the term Itoh peony generally refers to one of these hybrids and not to one of Itoh's original plants.
And then there is this confusion: Itoh's plants resulted from the hybridization of a herbaceous peony with pollen of a yellow-flowered tree peony hybrid. From the beginning the hybrids were described as herbaceous peonies. But they are not: my 'Yellow Crown' produces short (6"), perennial woody stems.
The comparatively huge, sweetly scented, globular flowers of 'Yellow Crown' hang down from their own weight, so much so that they are often hidden by the foliage of the plant. Some peony enthusiasts fault it for this. I'm not one of them: 'Yellow Crown' reminds me of a gracefully nodding tea rose.
Posted by McWort at 12:00 AM