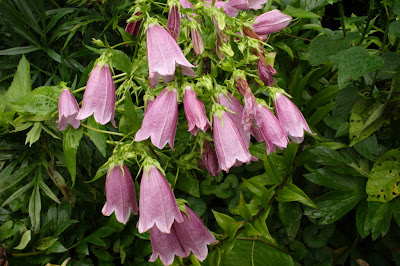 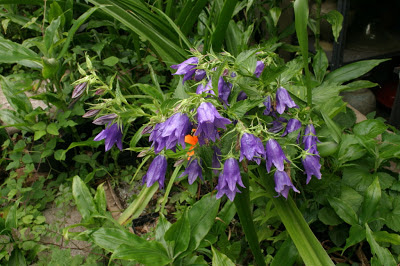 Campanulas in American gardens have had an erratic history, at least here on the east coast. Old books generally feature Campanula carpatica (a dwarf plant), C. persicifolia and C. medium (now very rarely seen in home gardens). In rock gardening books the lists of small delicate species run on and on. Two other robust border perennials, Campanula latifolia and C. lactiflora, appear now and then, but neither seems to have become firmly established as a garden plant locally.  The comparative scarcity of these plants in our gardens is perhaps attributable to the fact that they are prime slug salad; and most seem to do better in neutral or alkaline soils.

I can remember when the forms of Campanula punctata and C. takesimana began to make the rounds in my gardening circle. So many of us were glad to finally have campanulas which seemed to be so well adapted to local conditions. Soon plants became common at plant exchanges. If you’ve done much gardening you know what the next phase of this story is. It wasn’t long before the plants were tagged as thugs, invasive thugs at that. For years I daily passed a plant of Campanula punctata which grew in the narrow strip of soil between the side walk and the street in the business section of Bethesda.  Each year about this time it became a dome of big dusty pink bells – and I would make a note to myself that I should “get” that plant. That’s Campanula punctata ‘Cherry Bell’ in the upper image. I have to wonder what sort of cherries they had in mind when they named that plant.

Similar in growth habit and general adaptability is the plant shown in the lower picture: this is Campanula ‘Kent Belle’, said to be a hybrid of Campanula takesimana. It does not set viable seed and so its spreading is limited to its ability to slowly clump up. Color of this intensity and hue is rare in our gardens, and I really celebrated when I first saw it in bloom in my garden.

The similar hybrid ‘Sarastro’ I have not tried yet, but it looks very inviting. I’ve read that this was named for the nursery where it was hybridized, but the web site of Sarastro Nursery in Austria explains that it was the other way around: the nursery was named for the plant. It, too, is sterile, and is a hybrid of Campanula punctata and C. trachelium.  Here’s what the raiser, Christian Kress says:   “A few years ago I reproduced a dark violet seedling of a campanula, which resulted in a sterile, richly flowering sort composed of C. punctata and C. Trachelium, one growing wildly and the other seeding as wildly, the well-behaving result was called Sarastro, the evil ghost at the beginning showing its brave spirit in the end, exactly as my Campanula did.”

For more, Google Sarastro Nursery Austria.
Posted by McWort at 12:00 AM