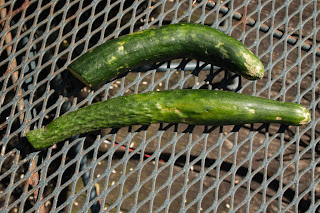 The gift of a couple of cucumbers last week has provoked memories of what I’m calling cucumber stories here.

The cucumbers were grown by a friend of my sister. The grower took up gardening a season or two ago.  The cucumbers are evidently of one of the long, seedless variety best grown on a support to keep the fruits straight. The ones I got were not straight – they were curved like a bull’s horn. No matter there: the shape does not determine the taste, and it is the taste in which I’m interested. After my sister handed them to me I got a knife and tasted one: they were delicious. During the week which followed I used them in a variety of ways, and these ways in turn kept me thinking about cucumbers all week.


The very appearance of those cucumbers brought back a memory: forty years ago I lived briefly in Manhattan. I had a room on the upper east side  in the house of some people I met through business connections. After I left Manhattan and returned home for good, I got busy with gardening again. I had a small vegetable garden that summer, and at about the time the vegetables were ripening, my brother in law was planning a business trip to Manhattan. I gathered up a bundle of my home grown vegetables and asked him to drop them off at the home of my erstwhile hosts. I still remember the look on  my brother in law’s face when he looked in the bag: my home grown vegetables did not look like grocery store vegetables. They were crooked where they should have been straight, they were lumpy where they should have been smooth,  some had been left to grow too long : in other words, these vegetables were not about to win a ribbon at the county fair. But they were home grown, and I had grown them. I never heard if my Manhattan friends even got the vegetables, and I long wondered if my brother in law really delivered them. I did hear from them later, but the vegetables were not mentioned. But I've never forgotten those vegetables, and when my sister handed me those two twisted, a-bit-too-big home grown cucumbers I was reminded of the ones I packed up for my Manhattan friends.  Don't we all feel that sort of pride about the first vegetables we grow in our own gardens?

The two cucumbers described at the beginning of this piece were consumed before I had a chance to photograph them; the ones seen above were given to me the other day by another gardener up at my community garden plots.  When they look like this, you have to keep reminding yourself that it's the taste which counts.
Posted by McWort at 10:39 AM