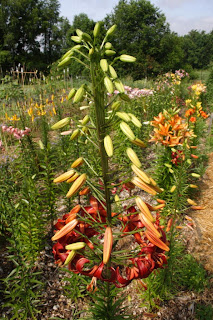 If you look carefully at the lily stem in the image above you'll notice something odd: towards the top of the stem the normally round stem begins to flatten, and the flower buds and blooms appear to be attached to a flat, strap like structure which at the very top begins to fork. In lily circles, this condition is called fasciation; in some other groups of plants such growths are called crests. These growths are fascinating, and since there are so many more flowers produced on these growths, you might think they would be highly regarded. They are not. This condition has been known for centuries, and old books have some particularly repellent illustrations and photographs of them.

Are they harmful? Growers have long debated this, but most growers now believe that they are not harmful, not a manifestation of disease, but rather an indication that the growing tip of the stem was damaged in some way at a crucial point in its development. I've never known the same lily plant to repeat the cresting year after year, But some varieties seem more likely to produce crests. The lily above, 'Red Velvet' is one such. They are certainly interesting and definitely colorful.
Posted by McWort at 12:00 AM