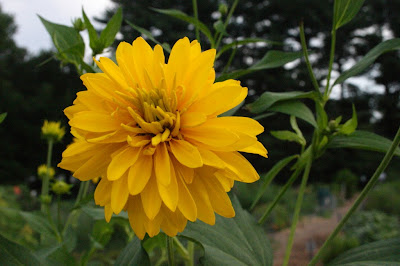 Known since the late nineteenth century, this robust prairie plant was one of the most esteemed and widely grown garden perennials at one time. It's widely known as "Golden Glow", although officially it's 'Hortensia'.
At six to seven feet high, the slowly spreading clumps produce a spectacular effect when in full bloom. It’s also easily grown, and no doubt there was a time when it seemed to be everywhere. Human nature being what it is, it was not long before this plant was on the same list with scarlet sage: more than a few self-styled purveyors of good horticultural taste in the early twentieth century warned gardeners to eschew the two of them. How wrong they were!

Eventually the plant became so marginalized that it became hard to find. Luckily for us we did not lose it. The modern surge of interest in perennials seems to have largely ignored it. But it’s still out there, decorating summer gardens as beautifully as it ever has.

It’s hardly a plant for small gardens, and it does become an aphid factory in late summer. But for a couple of weeks in the summer you can cut flowers from these plants to your heart’s content.
Posted by McWort at 9:23 PM