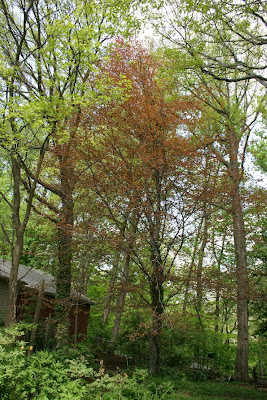 The copper beech was planted back in the early '60s, probably 1961-1963. I'll bet if I dug around I could find the receipt. It came, through the mail, from a once famous source of trees in New England. It was supposed to have been a weeping copper beech, and for the first two seasons I still believed it. When the soft new growth spurted into growth it arched gracefully downward for a few weeks. I was obviously in deep denial. Like almost everything else in this garden, it's been moved at least once, although it's been in its present position for over forty years.

When the garden was designed about fifteen years ago, one of the paths was positioned to allow a clear sight line from the fireplace room to the the base of the beech tree. This is one of my favorite views, especially during the winter.

The vernal leafing out of a big copper beech is one of the really dramatic events in a garden. The huge space occupied by the branch work changes over a period of maybe two weeks from a frettwork of pewter to a commanding presence of dark maroon and garnet. The newly emerged foliage is very dark, dark with saturated color. As the summer advances, the red tones in the color fade leaving brown with golden highlights.

When I look back on my years of gardening, I recognize the planting of the copper beech as one of my good decisions.

The image shows it in early May as it begins to leaf out.
Posted by McWort at 1:09 PM