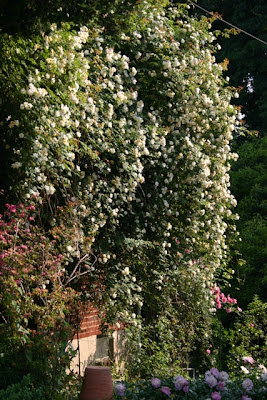 Although I’ve known about Noisette roses for decades, the concept of “Noisette rose” has proved to be elusive. My introduction to the group came from books. My introduction to the actual plants of this group, the group in its nominal sense, came through the widely revered old cultivar ‘Madame Alfred Carrière’. Another early acquisition, since lost, was ‘Champney’s Pink Cluster’. I think I can make a good argument that neither is really a Noisette rose.
In the case of ‘Champney’s Pink Cluster’, it’s the parent of the Noisettes and thus not a Noisette itself. It preceded the hybridizing work done by the Noisettes (the people, the family who did the early work to develop this group) themselves.
In the case of ‘Madame Alfred Carrière’, let’s just say she is for her time a very modern lady not about to be bound by the conventions of her class. She is, in fact, better understood as a modern, large-flowered climbing rose. She has Noisette in her ancestry – Noisette and a lot more. That those promoting her have chosen to emphasize the Noisette side of the family is perhaps understandable, but it’s also misleading.

Redouté painted one the roses raised by the Noisettes. To my eyes they look like what you might expect to get if you crossed Rosa multiflora with dwarf China roses. These original Noisette roses were quickly supplanted by better roses: better in the sense of more colorful and with larger flowers. It is said that much of the early breeding work in this group used the then widely grown tea roses, and the best Noisette roses are generally agreed to be the so-called tea Noisettes. It’s also generally agreed that these tea-Noisettes are not roses for us here in zone 7 eastern North America, although old books often contain descriptions of the lengths gardeners of those days went to grow these plants in the open. That they are cut back severely in our winters is only part of the problem; the other problem is that they are potentially huge plants, not easily protected in the winter.

The Noisettes in the accompanying image are two, although you would have to have very sharp eyes to realize that. They are ‘Alister Stella Gray’ and ‘Claire Jacquier’, and they look so much alike that I have spent a lot of time convincing myself that they really are distinct. These roses have a characteristic, light and very pleasant fragrance. It didn’t take as long as you might think for them to go to the eves of the house and then arch out gracefully over the garden.

All three of the roses mentioned here were raised in the late nineteenth century, long after the Noisettes as a group had moved from center-stage. Curiously, ‘Madame Alfred Carrière’, the least typical of the group, was the earliest of the trio to make her debut (in 1879 according to G. S. Thomas).

The image shows them at peak bloom in late May. This soft yellow color is lovely in the garden. In my experience, these roses never bloom again later in the season.
Posted by McWort at 7:59 AM