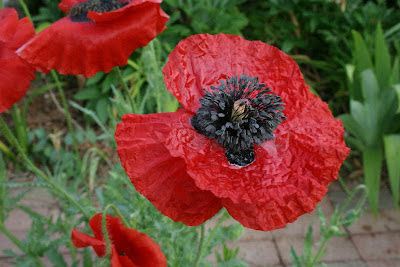 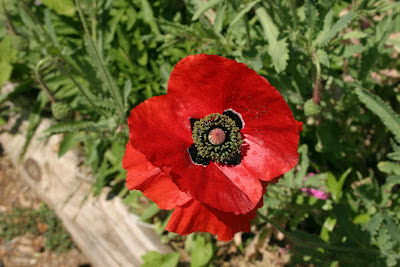 Two years ago a local realtor mailed out an advertisement which was accompanied by a packet of poppy seeds. Ordinarily I toss seeds received in this manner into the mail pile and forget about them. But at the time I was contemplating some changes in a part of the garden, and I knew there would be some open space. Sometime in the early fall I scattered the seeds in the garden; a month or two passed before I noticed a few seedlings. As I recall, there were three. One of these grew lustily, and went into the winter as a six-inch rosette of bristly foliage. At this point I was resisting the temptation to count my chickens…corn poppies for me have never been reliable about surviving the winter.

But this plant did survive the winter and go on to grow very well. It quickly dwarfed its two companion poppies, and was eventually much larger than any spring-sown poppy. Most accounts of sowing poppy seeds urge that the resulting seedlings be thinned ruthlessly. My isolated plants had no competition to speak of, and the big one went on to teach me a good lesson in poppy culture. It grew to be about the size of a peck basket, had dozens of flowers for literally months and provided plenty of seed for the next year.

Is there any plant in the garden which gives so much pleasure for so little expense? Those red poppies are as beautiful as anything I grow, and as they were among the first flowers I grew from seed as a child, they keep me in touch with my horticultural beginnings. It’s a real pleasure to come out in the early morning and watch the buds open: in one of the images you can see such a flower, still in its crinkly stage. The developing buds on their gracefully arched stems are a sort of loveliness of their own. To see the hairy stems backlit by the rising sun is another early morning pleasure. And then there is the red color of the flowers: poppies are exciting! The sun soon lights up the bowl of the flower and the petals glow like colored glass, and a gentle breeze causes the blooms, blooms so improbably large in proportion to their wire-like stems, to bob and sway. Soon the insects find them, and the greenish-yellow pollen soon musses the formerly neat interior of the bloom; by then, the petals have stretched out to their full, smooth-surfaced extent.

Every child should have a garden of poppies.
Posted by McWort at 8:08 AM

I have bought the seeds nearly every year, sown them and by chance one may have grown and other times not a one. I want them so, but it doesn't work for me.