Life under a pergola 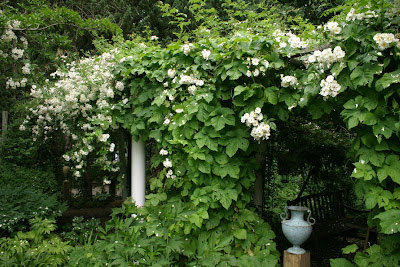 When I redesigned my garden about fifteen years ago, I took the bold step of installing a pergola across the main longitudinal axis of the garden. The garden is sixty feet wide, and the pergola is forty feet long. In crossing the main axis, the pergola divides the garden into a section of approximately one third of the garden’s area and another of approximately two-thirds of the garden’s area. The smaller area is the one nearer the house and forms what I call the pool garden.

The pergola now supports large plants of several climbing roses which during rose time produce a roiling, fragrant foam of white which covers the pergola. When the atmospheric conditions are right, the garden fills with the scent of roses.

The pergola fulfils several functions. Its main purpose was to be a support for the climbing roses I wanted. Its placement gives it a major role in shaping the garden. It also serves as a path from one side of the garden to the other. Once the roses had grown up into place, something else became apparent. The area under the pergola is a garden room of its own, the most conventionally defined such space in the garden. At night, when the space under the pergola (the interior of this garden room) is softly illuminated by candlelight or even with the reflected glow of a spotlight, there is a sense of enclosure which is uniquely satisfying. This is produced by an effect comparable to that produced by a scrim in the theater: the light reflecting on the leaves of the vines which clothe the sides of the pergola produces the illusion of walls defining the space. The rest of the garden disappears, and the viewer is left with the impression of being in a comfortably big, green-walled hallway or room. It’s an enchanting effect. The sense of seclusion this produces is wonderful. It's a favorite place for reading at night, even on mild winter nights.
For more views of the pergola see: http://www.jimmckenney.com/pergola_photo_gallery.htm
Posted by McWort at 9:09 AM