The surpassing delight of all flowers 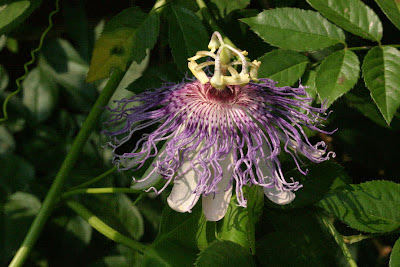 This native plant, Passiflora incarnata, made it to England before there were permanent English settlements in the State of Maryland. In Parkinson’s Paradisus of 1629, it is called “Maracoc sive Clematis Virginiana. The Virginia Climer”..."the surpassing delight of all flowers". For decades I searched in vain for wild local populations. Then a friend tipped me off to a local population in a public park in a nearby county. Those plants were probably introduced. I collected some fruit there, and from it grew several seedlings. I nurtured these most solicitously and hovered over them for the first two years: I wasn’t taking any chances with my Maracocs. Finally they took off and started to put on good growth. Two years later I was pulling the stuff out by the yard. The ones I have now are from a later acquisition. Each year I pull most of the sprouts out and allow only a few to grow: that way it covers only a few square yards of space annually. This plant is often praised for its scent. Parkinson wrote "these flowers are of a comfortable, sweete sent, very acceptable..." Now, nearly four hundred years later, when I put the flower close to my nose, the scent is disagreeable, very disagreeable. But when the vines are blooming freely on the wall outside my open bedroom windows, the scent which drifts in is something else again – and very pleasant. One of life’s simple pleasures is to take a nap on a warm summer day when the maypop is blooming and mixing its scent with that of the nearby boxwood bushes –that indeed is a surpassing delight.

For some other views, see: http://www.jimmckenney.com/passiflora_page.htm