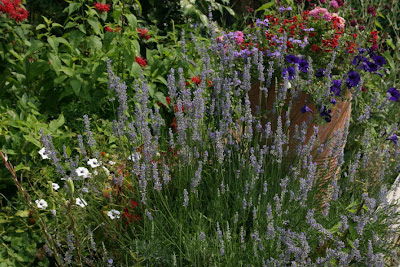 I tried lavenders now and then when I was younger, always without long term success. Occasionally I would see a seemingly thriving plant in a local garden, and it must have puzzled the owners of those gardens to see a young man standing there for a long time and peering down at the plants. Eventually I gave up on lavenders and wrote them off as unsuited to our climate.
Years passed, and one year I decided to build a dry brick wall and plant it with wall plants. Among the plants tried were several Lavandula × intermedia cultivars. For several years these did surprisingly well. It quickly became apparent that they would be too big for the space allotted to them.
The question of what to do about these big lavenders was solved one cold winter when the wall heaved and collapsed. I had no regrets, and was glad to have learned that at least some lavenders would do well here if well sited.
Two years ago, in re-doing a portion of the front garden, a long raised bed was built in full sun. Several lavenders went into this bed on trial. The “as-purchased” names are ‘Hidcote’, ‘Munstead’, ‘Lavender Lady’, ‘Provence and ‘Grosso’. ‘Provence’ and ‘Grosso’ are Lavandula × intermedia cultivars. It has been said that material distributed under the names ‘Hidcote’ and ‘Munstead’ is generally wrongly named. All have grown well and ‘Provence’ and ‘Grosso’ have grown quickly into handsome rounded mounds.
I was showing these lusty plants to a friend recently: they were in full bloom and were everything I have wanted in a lavender. I was praising the rapid growth of the Lavandula × intermedia cultivars, saying in effect that I had finally arrived as a lavender grower. But she shook her head and told me that no, they don’t last, and the robust growth which impressed me so much would eventually be their downfall when a bad winter would break open the centers of the big bushes and spoil their appearance.
We’ll see what happens.
That's Lavandula × intermedia 'Provence' in the photo.
Posted by McWort at 8:32 AM