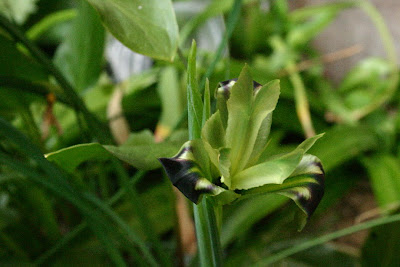 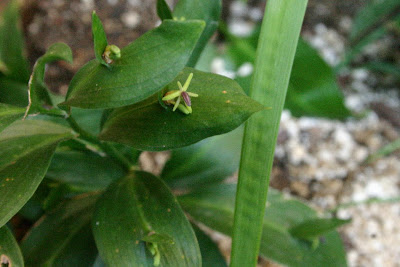 A friend once took me to task for my taste in plants: ‘Jim,” he said, “you only like the dingy brownish-green ones which are open for a half-hour in the middle of the night.”

That’s not quite true, but I do recognize a bit of myself in that appraisal. Big, colorful, flashy – those are not the qualities which get a plant into my garden. On the other hand, fragrance does, even if it’s coming from some inconspicuous little dowd. And subtle, unusual color combinations often catch my eye.

Here are two plants which appeal to me greatly. Iris tuberosa (also known as Hermodactylus tuberosus) is both unusual and beautiful, isn’t it? The flowers and the leaves suggest a reticulate iris, but it grows from a tuberous corm rather than from a true bulb. I had no success with this one until I turned it loose in one of the cold frames. Now it’s going to town.

The other image shows a real oddity. This is Ruscus hypoglossum. Some of you might know Ruscus aculeatus. In fact, millions of people have seen the foliage of R. aculeatus because it is dried, spray painted and sold as Christmas decoration. Alive, the plant is hard and repellent; dried it is dangerously spiny. Ruscus hypoglossum on the other hand superficially suggests what you might get if you crossed Ruscus aculeatus with the related Danaë racemosa. It’s a softer plant with broader “leaves”. “Leaves” in quotes because what look like leaves in these plants are actually green, flattened branches called cladodes or cladophylls.

In the garden these plants suggest little woody shrubs. In fact, they are monocots, close relatives of asparagus and thus part of the lily family in its broad, older sense.
Posted by McWort at 8:39 PM