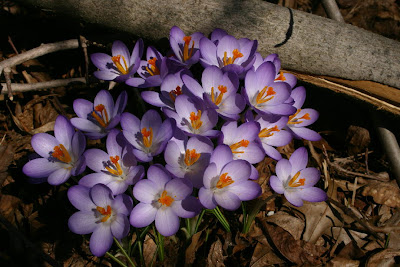 There are probably more crocus varieties available in the trade now than ever before. Specialists offer a bewildering array of species. A good assortment of garden crocuses is readily available. I've never seen a crocus I didn't like, and I grow a lot of them, from the familiar Dutch crocuses to rarely grown wild crocuses.

Yet I'm pretty sure I'm not the only one who feels a special affection for tommies. Tommies are the forms of and near hybrids of Crocus tommasinianus. They are early, free of growth, make themselves at home and eventually form seeding populations which vary and provide keen interest to those with sharp eyes.

Tommies can be divided into three groups: the wild forms, the garden forms (these probably of hybrid origin), and the ones which arise in the garden wherever an assortment of tommies grow. I call this last group the "lawn tommies" because they make themselves at home in lawns, eventually seeding into broad masses. One sometimes sees them in old neighborhoods producing a fleeting haze of amethyst over the lawn.

In the image above, you see a richly colored garden form. This garden form lacks the silver exterior of the lawn tommies, and is a less attractive flower because of that. When the sun comes out again, I'll post some fresh images of lawn tommies.

You can't buy lawn tommies; you have to acquire them from someone who already has them. A few corms or a pinch of seed will get you started.

Several years ago a member of our local lily society appeared at one of our bulb exchanges with a handful of crocus corms to exchange. He didn't know what they were except to say that they were the little purple ones which grow in lawns. I brought some of these home with me, and each year they have bloomed and provided a reminder of that friend who has since died.

For the observant, tommies provide one of the neatest little flower spectacles in the garden. Once they begin to seed around, they revert to what is evidinetly the wild form, a slender crocus silvery on the outside and brilliant amethyst on the inside. On cloudy or rainy days, the thin buds stand upright, barely visible little pewter exclamation points scattered over the lawn. But when the sun comes out, there is a little miracle: the silver outer tepals open to reveal the rich amethyst of the inner tepals. You want to catch this as it happens in order to be able to enjoy the contrast between the silver and the amethyst.


Once you've seen this, you will understand why tommies have such a loyal following.
Posted by McWort at 9:33 AM