Yesterday I attended an informal gathering of shakers and movers of the local gardening scene. The event was occasioned by the visit of Sean Hogan of Cistus Nursery in Portland, Oregon. A copious meal served in three removes kept the group circulating, meeting and greeting. Our hosts, Jim and Dan, are probably still in bed this morning: what a spread - and all of it home made! Maybe I should have volunteered to come back today and help with the clean up.

The weather was perfect, the garden was full of hellebores, and the many conversations were intense and entertaining. I ran into two fellow bloggers, Connie of Hartwood Roses

Chris is interested in everything; Connie and I share an enthusiasm for certain roses. I could have talked to each of them all day without getting bored.

Now to the roses.

A bit of history helps here. What follows was taken from Graham Stuart Thomas's Climbing Roses Old and New of 1965 and Helen Van Pelt Wilson's Climbing Roses of 1955. I acquired and devoured Thomas's rose trilogy near the times they were originally published. These provided the structure on which my subsequent understanding of garden roses was based. Callow youth that I was, I had a low regard for two important home-grown products: Helen Van Pelt Wilson's Climbing Roses mentioned above and Richard Thomson's Old Roses for Modern Gardens of 1959. My appreciation for these works came only after I realized that Mother Nature has a thing or two to say about which roses we can grow.

Late in the nineteenth century the Belgian botanist François Crépin described two new Asian roses using the names Rosa wichuraiana and Rosa luciae. Some modern botanists treat these as conspecific. For over a century the names were spelled as I have given them. Recently there has been a move to change the spelling of each name: wichuraiana becomes wichurana and luciae becomes lucieae in the new spellings. Or at least I think that's what is happening. And there are other spellings. Max Wichura would no doubt be surprised at the trouble his name has given gardeners.

At the end of the nineteenth century, the American nurseryman William Manda began to use the one he knew as Rosa wichuraiana for hybridizing. The results were amazing: he produced several roses of unique character, roses unlike any which had been raised before. These roses produced prodigiously long limp canes ideal for training on walls, pergolas and fences. One of Manda's roses, 'Gardenia' of 1899, is still grown and loved by many gardeners. Before I leave Manda, I should mention that I grow an ivy Hedera helix 'Manda's Crested' which might have originated in his nursery (I have not been able to confirm that yet).

Manda's success was quickly imitated by others, most notably by Dr. Van Fleet in the United States and by the firm of Messieurs Barbier et Cie in Orléans, France. Dr. Van Fleet's hybrids became well known here in the US - and deservedly so. It's time for a revival of interest in the Van Fleet hybrids. Other than the excellent and still widely sold 'New Dawn', a bud sport of 'Dr. Van Fleet', few are now widely grown.

The Barbier firm used what they knew as Rosa luciae to produce a line of these hybrids over a period of two decades, although the best known ones were produced early in the century. The Barbier hybrids have medium-sized flowers which are produced prodigiously. Some rebloom in some climates. The ones I know do not rebloom for me.

Here's what intrigues me: for all their good qualities, these Barbier roses do not seem to have caught on in America. I checked McFarland's Modern Roses (1930), and many of them are there: someone must have been growing and offering them. Mrs. Wilson mentions only 'Aviateur Blériot', a rose Thomas does not mention. I can find no reference in Wilson's book to 'Albéric Barbier', 'Albertine', 'Alexandre Girault', 'Auguste Gervais', 'François Juranville', 'Léontine Gervais' or'Paul Transon' - to cite just some of the once better known members of this group.

Could it have been a language thing? Maybe Americans didn't like being told they were misspelling names when they wrote e instead of é (or printers despaired because their fonts did not include é or ç. McFarland got the é right, but the ç seems to have eluded him). Or could it be a case of the public confusing these excellent roses with rambler roses? I suspect the latter. The early rambler roses were largely derived from Rosa multiflora. As a group, they were and are very mildew prone: some of the older varieties are full of mildew by the time they come into bloom. The first generation hybrids of Wichura's rose are free of mildew and generally black spot also. Someone was not getting the word out.

Another possibility comes to mind: then as now, people want roses which bloom continually. Even now, a century later, we have very few contenders for that distinction. And for the most part, fragrance has been a casualty in this pursuit. In June I wouldn't look twice at a Knock Out rose; but in early December, when it's likely to be the only type of rose blooming freely, I see it in a new light. Now if most of them only had fragrance...
And there is this possibility for explaining the seeming scarcity of Barbier roses in gardens back then: why grow foreign roses when excellent and somewhat similar roses were being produced in the US by Van Fleet? Most of us have outgrown that sort of chauvinism by now, but it was common back in those days. Here's a photo of Dr. Van Fleet from McFarland's Modern Roses: 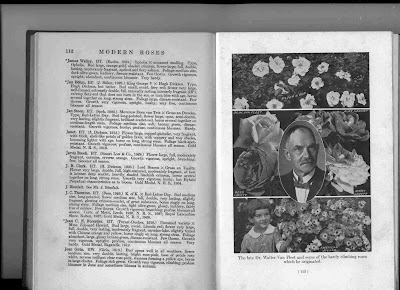 Since writing the above, I’ve been doing a lot more rose reading. And I’ve run across an important bit of rose history which most commentators have neglected. If you had asked me last week who got the ball rolling with these wichurana hybrids, I would have said what most books say, William Manda. It was Manda who introduced many of these early hybrids to commerce. But it was M. H. Hovarth of Cleveland, Ohio who raised them, and his work seems to push back the dates of their development by at least a decade. More about this later…