The most beautiful red witch hazel... 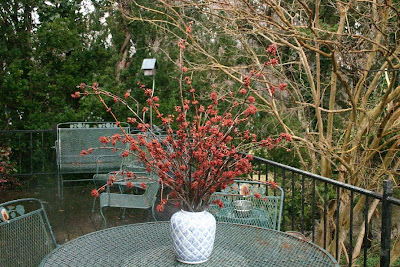 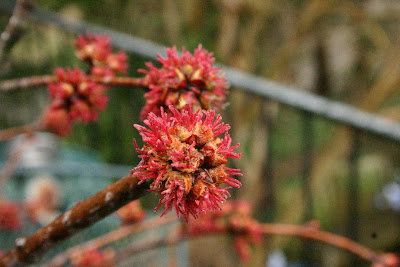 ...except that it isn't a witch hazel. From a few yards away you might confuse these with one of the red witch hazels. But that’s not what they are: these are blooming branches of the native Acer rubrum, the red maple. This is a common wild tree locally, and for years I have enjoyed the red haze made by this very early blooming species.


In fact, for years I’ve been asking myself why more people don’t grow these maples for their flowers. One reason is that they are big trees, and the flowers are usually high up in the canopy and not easily viewed. The ones in the image above were on branches which came down in the recent heavy snows. They had been heaped along the road side to be hauled away. Here was an opportunity I had been waiting for: I took my pruning shears down and cut out a nice bouquet.

When these trees are in bloom, the ground beneath them is littered with the flowers. I had long suspected that squirrels were causing this. When I got my bundle home, I had proof of it. I placed the cut stems in a bucket of water on a table out on the deck and then went inside to get my camera. By the time I got back, two squirrels had found the cut stems and were already helping themselves to the flowers. I wonder what it is that they are eating. They seem to drop the flowers after biting them: are they after nectar?
Posted by McWort at 7:45 PM

How It Grows said...

What a great arrangement!