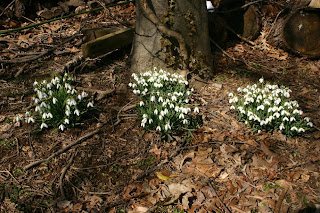 In a mild winter, there is the possibility of having snowdrops of one sort or another off and on throughout the winter. That's been true this year, too, although for much of the last month and a half the snowdrops have been buried in the snow. The snow is gone now in the sunnier parts of the garden, and as soon as it melted the snowdrops you see above opened as soon as the temperature rose. When I last saw them before the snow, they were not so well developed: evidently, they continue to develop under the snow cover.
Thanks to that snow cover, the season for snowdrops this year will probably be much condensed. The snowdrops which typically bloom in mid winter are blooming now with the ones which typically bloom in late winter. If there are any insects about, this might make for some interesting hybrids.
There are at least five named snowdrop cultivars in the image above. They have been there for years, and it's about time they were divided. I keep postponing the division because snowdrops in dense clumps are very attractive to me.
Posted by McWort at 5:08 PM

Email ThisBlogThis!Share to TwitterShare to FacebookShare to Pinterest
Labels: snowdrops