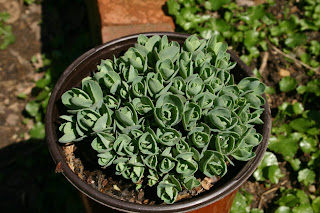 There are a lot of good reasons to like sedums, and here’s one of them. The big border sedums, after they have put on a few years of growth, form wide mats dense with sprouts. Early in the year, just before they put on much new growth, they go through their “brain coral” stage. It doesn’t last long, but it’s totally cool as long as it does.


Here you see Sedum ‘Munstead Dark Red’, a form or hybrid of Sedum telephium I think. Other good sedums for this effect are S. sieboldii, S. spectabile, S. ‘Autumn Joy’, S. cauticola and its close relations, S. ‘Vera Jameson’ and similar forms – there are probably lots of others which I have not yet grown.
Posted by McWort at 7:50 PM