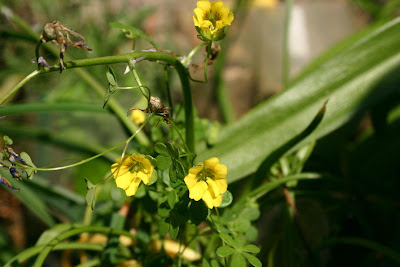 The little specks of yellow in the image above represent – unlikely as it seems – a sort of gardening triumph for me. Those flowers are the flowers of Tropaeolum brachyceras, a plant which grows wild in Chile. The familiar garden nasturtium is a Tropaeolum, a much more showy and easily grown one. But for the grower in our climate looking for a challenge, these Chilean species provide a stiff one.


The garden nasturtiums are grown in our climate as annuals, although by nature they are perennials. These Chilean Tropaeolum are also perennials, perennials which grow from a tuberous corm (or if you prefer, just plain tuber). In September 2008 I received one of Tropaeolum brachyceras. It was about the size of a fat grape (sorry to be so technical), and was planted in the soil of the most protected cold frame right away.. It did not begin to sprout until almost a year later; that’s typical for these plants – they sometimes take a year off.

Last fall I noticed the hair-thin sprouts of the plant emerging. They reminded me of the fronds of some Adiantum ferns – they were that thin and delicate and black, too. The plant continued to grow throughout the fall and winter. At one point, the outside temperature dropped to 3 degrees above zero F. Yet things inside the cold frame must have remained snug, because the tender new growth never showed any damage.

Several weeks ago flower buds began to appear. I let out a cautious, preliminary YIPPEE. On April 4 the first flowers opened. I had done it, I had flowered one of the Chilean Tropaeolum. I suspect that I now belong to a rather exclusive club.

It has not gone entirely to my head: I admit it, those little yellow flowers look suspiciously like those of the little weedy oxalis which infests the lawn.
Posted by McWort at 3:58 PM