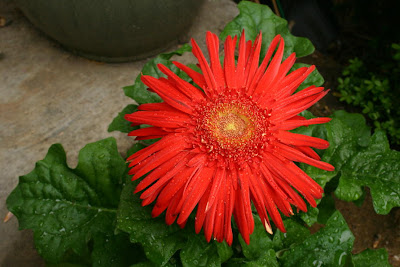 I picked this up at one of the local grocery stores the other day. The flower is huge (a bit over five inches in diameter) and the stem is not much taller. Had the plant been treated with some sort of growth retardant to keep the height down? And will it eventually produce taller stems?


And why in the world am I buying gerberas? They are not dependably hardy here, so that rules out their use as garden plants. I suspect that they will not bloom once the night temperatures go up.

But this plant combines a spectacular flower with an improbable plant size so well that it’s irresistible. Do you know who Madame 5 by 5 was? That was one name used for the early twentieth century opera singer Luisa Tetrazzini. As a singer she was spectacular, and the recordings exist to prove this. As her celebrity grew so did her girth. Short to begin with, at the height of her fame she was very well rounded indeed! Her name survives, outside the rather esoteric world of those of us who still listen to recordings made a century ago,  as a name for certain pasta preparations for which, as you might suspect, a proper serving is, shall we say, copious.

So in this garden, Madame 5 by 5 it is. Now I’ll go listen to Tetrazzini’s wonderful recording of Tosti’s song “Aprile”.
Posted by McWort at 1:55 PM