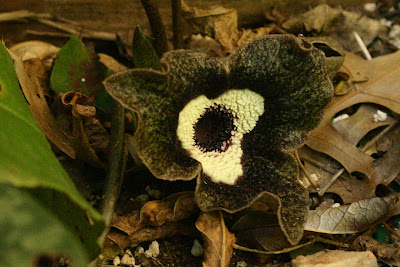 The ancient botanists sometimes distinguished between male types of plant and female types of plant. For instance, there were male ferns and female ferns, and the names were picked up and carried over into modern plant nomenclature as filix-femina and filix-mas. The distinction had to do with how finely the fronds were cut.

I think of some plants or flowers as feminine and masculine. Sweet peas are definitely feminine to me, feminine in a girly way. Some hybrid tea roses are feminine, but often in an aggressive, threatening sort of way.

And then there are the boy plants. These are not simply masculine in the way of, for instance, oaks. They are plants in which boys, even boys who ordinarily don’t have an interest in plants, will take an interest. The best examples are those priapic aroids which are the subject of the Chautauqua show given by Tony Avent: when he’s in town, be sure to get into the tent and catch the performance.

There are other categories of boy plants: the ones which stink (lots of aroids again) or the ones which are simply a gross-out in appearance. The asarums provide some good examples of gross-out plants. When Asarum noibilissimum blooms, you want to try to say something nice about the flower (“It’s sure big!”) but “prepossessing” won’t be the word you are looking for. It’s not just the look, it’s the texture and the colors. To me it looks like a big fat scab, or suppurating flesh or, and this really isn’t nice so close your eyes for the next few lines if you are sensitive, “where the sun don’t shine”. OK, I warned you. We have to be objective (or is it obnoxious?). But that’s why it’s a boy plant.
Posted by McWort at 4:22 PM