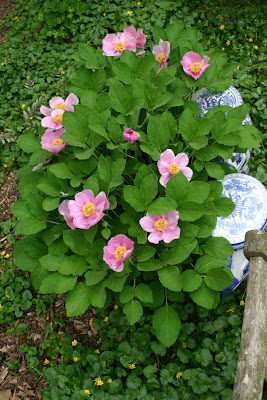 Peony season 2010 opened on Tuesday of this week with, as usual, Paeonia mascula. Some recent accounts make this P. caucasica, but I've known it as P. mascula most of my gardening life;  and I'm rapidly approaching the age where I can claim to be an old dog who won't learn new tricks.

The flowers of these wild peonies are a fleeting presence in our gardens. Temperatures earlier this week were hovering around 90º F (~32 º C) for several days in a row. Under those conditions, the flowers can be literally ephemeral, although so far they have lasted for several days. Late yesterday afternoon, as I was cleaning up in preparation for the incipient rain storms after a long and very productive day in the garden, it occurred to me to photograph the peonies now in the event that they fell apart during the rain storms. The light was not good, so the image above in not the best. There will be another chance soon: the flowers survived the storm - and so I might replace the image above soon.
Posted by McWort at 9:30 AM

Nice! I was not pleased with the heat while my tree peonies were flowering, but they've held up and will be much happier with the cooler temperatures now.