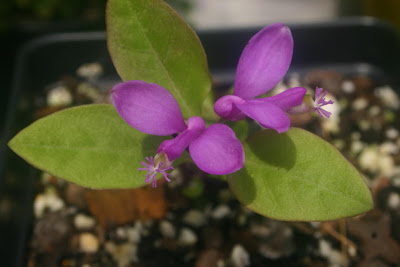 Many birders keep a life list, generally a list of every species they have seen. Some vary the game by keeping a list of birds they have heard in song, If I’m not mistaken, a lot of the birds John James Audubon painted were later invited to join him at the table: did he keep a list of the birds of America he had eaten?


The idea of a life list for plants intrigues me, but I don’t keep one. Yet I am aware of certain plants I would very much like to see, and it becomes a sort of celebration when I do. I had such an experience the other day, and it was occasioned by the little charmer you see in the image above. That’s Polygala paucifolia, a plant native to widely scattered acidic woodlands here in eastern North America.

I would like to say I had grown it myself; but as you can see, it's in a pot. I purchased it last weekend at a native plant sale.

I’ve probably known about this plant since I was a teenager, and photographs of the plant never failed to pique my interest. It’s such a beautiful little plant that one would expect it to be widely grown, and yet…there are problems. It’s native to acidic woodlands, and like so much of the native acidic woodland flora, it does not last long under typical garden settings. One possible culprit: I’ve heard that the local tap water is treated to have a pH of about 7. Water plants which need acidic conditions with that, and it’s only a matter of time before they depart. I’ve got my fingers crossed, and there is plenty of vinegar on hand to treat the tap water. But I might be publishing an obituary in a few months.
Posted by McWort at 6:24 PM