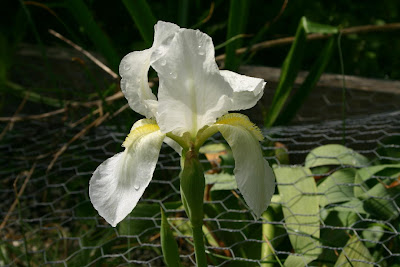 This is the so-called Muslim cemetery iris. It’s been known for centuries in western gardens. It was originally named Iris albicans, as if it were a species. But as it turns out, it’s an old hybrid. As a result, one modern way to format the name is Iris ‘Albicans’.

Old Iris ‘Albicans’ remains a worthwhile garden plant. It blooms with the earliest peonies and columbines, well before the tall bearded sorts.
Posted by McWort at 5:13 PM