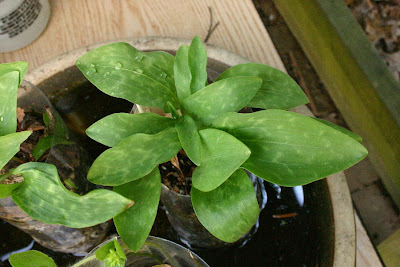 If I told you that this is the foliage of a lily, would your next question be “Is it diseased?” If so, you would probably have lots of company. On the lily discussion forum this week someone asked just that question about his seedlings of this species.


This is Lilium tsingtauense, one of the eastern Asian martagons. It does not look like a martagon, but it breeds with the martagons. In bloom, the flowers are the exact color of the tawny daylily, Hemerocallis fulva. But there is this difference: the flowers of the lily are shiny, as if lacquered.

This species is noted for the handsome (NOT diseased) mottled pattern seen in the newly developed foliage. Later in the season the pattern disappears.

I’ve never seen a plant of this species higher than about two feet at the most. But it is said to reach four feet under good conditions. It is well adapted to our local conditions but rarely seen in local gardens.
Posted by McWort at 8:04 PM