Yet another new rose 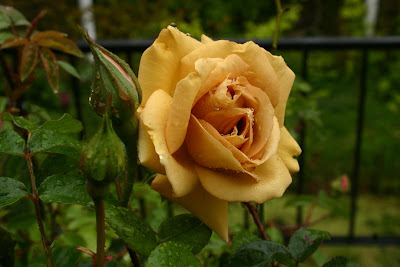 Another of the new roses from Vintage Roses has started to bloom, this time the oddly-named ‘JACtan’ which you see in the image above. When I selected this one, I broke one of my most basic rose-buying rules, the rule that dictates that I buy only roses noted for great fragrance. ‘JACtan’ has fragrance, but evidently it is not notable for that. I have not tested the bloom shown above in warmth: it’s been rainy and cool during the period in which the blossom opened. So far, I detect a slight tea fragrance (this is not a tea rose but rather a modern, large flowered climber).

‘JACtan’ is such an ugly name that I’m determined not to use it in this garden. For now, I’ll think of it as the “melon rose” since the color approximates that of the flesh of some ripe melons. I’ve read that the rose was originally named ‘Butterscotch’, and what in most respects a great choice that was. Unfortunately it failed in one key respect: the name ‘Butterscotch’ had already been used for another rose. 'JACtan' was originally introduced by the Jackson & Perkins Company not quite twenty-five years ago. Apparently it was never given an agreeable name, and it has been making the rounds all these years under the repellent moniker given above. This is, I suppose, an abbreviation of the company name squashed together with the color (which is, in some lights, tan).

This is a beautiful rose! I have been growing it for several years next to Aschermittwoch, and it makes a good combination. I'm sure you will love it, too!

I have also ordered a couple of roses from Vintage and although my deliveries have been delayed until mid-May, I can't wait!