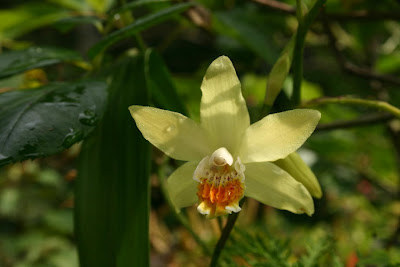 This is Bletilla ochracea 'Chinese Butterfly'. I have this thanks to the kindness of a friend. At one of the big local plant sales earlier this year I ran into him at one of the booths. I was curious to see what he had picked out, and he began to show some of his choices to me. He also explained that they had been pre-ordered. At first I missed that part because I heard him mention Bletilla ochracea, a plant high on my want list. I had grown this yellow-flowered species years ago, and was keen to acquire it again.


So as it turned out, there were no plants of Bletilla ochracea for sale at the booth. I must have gone into a visible tail-spin, because he offered to let me buy the plant for myself. I jumped at the chance. And when I had the plant in my hands, I noticed an until-then unnoticed bonus: the plant had an inflorescence.

After paying for the plant and again thanking my friend for his generosity, I noticed the stick tag in the pot. I expected it to say Bletilla ochracea, but instead it said Bletilla ochracea 'Chinese Butterfly', a name I knew nothing about. And the color picture on the tag was disturbing: it showed a white-flowered plant. When I got home, I did some Googling: I didn't like what I saw.

Last week the picture changed entirely. The flower buds had developed to the point that I could see color, and it was not white. It was a definite soft yellow. I was happy again. Last night the first flower had opened enough for me to see that I indeed had a yellow-flowered Bletilla again.

Beautiful color. Ours at the Arboretum are seed grown from wild collections. We have a range of colors from palest yellow to....not quite so yellow.