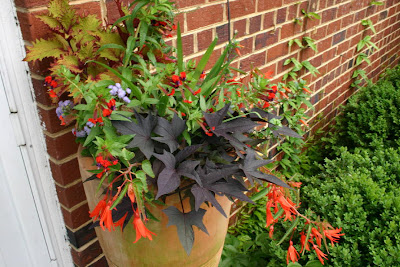 Years ago one of the local big box stores had some very handsome, tall, terra cotta planters on sale. I bought three; a few years later, one was knocked over and broke. The two remaining are used for summer flowering container plants. They are moved around from year to year, but typically they are used as end points for long borders.

This year one is right at the front door. The house is brick, and the color of brick is notorious for the successful warfare it wages against reds with even a hint of blue in them. So the suite of plants chosen for this group includes only reds which lean ever so slightly to the orange side of the traditional color wheel. The plants used are Salvia splendens 'Early Bonfire', Solenostemon (coleus) 'Henna', Cuphea 'David Verity', Cuphea 'Fireworks', Begonia boliviensis 'Bonfire', Crocosmia 'Emily McKenzie' and Ageratum 'Blue Horizon'  and Ipomoea batatas 'Blackie' for a bit of contrasting color. There is also a plant of lemon verbena, Aloysia triphylla, to provide scent.

As you see it here, the plants have been in place for maybe a generous two weeks. I'll try to remember to post another image later in the season when things have put on some size.
Posted by McWort at 2:36 PM