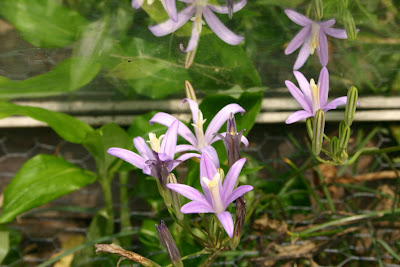 The various Brodiaea are not common in our gardens, although one cultivar, 'Queen Fabiola', is widely marketed and very inexpensive (and very attractive!). When I first started to grow the members of this genus long ago, I had doubts about their hardiness. And after a year or two the plants did disappear in the garden. But cold hardiness pure and simple is probably not the main problem; wet summers are a big problem. I now grow many of the bulbs native to the west coast of North America under summer cover – the cold frame lights are placed over the beds from late May until sometime in September. This keeps the soil relatively dry; under these conditions many bulbs difficult in the open garden will thrive. In the image above, what looks like a reflection is a reflection: the lights are already in place.


If you have already grown some of the other species of Brodiaea, be sure to give this one a try. It’s taller and has much larger flowers than most species (in fact, I don’t know of one larger).

The genus Brodiaea has been placed in the Liliaceae, the Amaryllidaceae, the Alliaceae, the Themidaceae and, according to the PBS wiki, the Asparagaceae at various times.
Posted by McWort at 10:20 PM