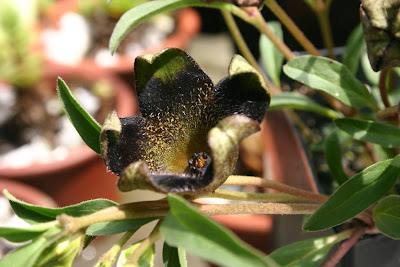 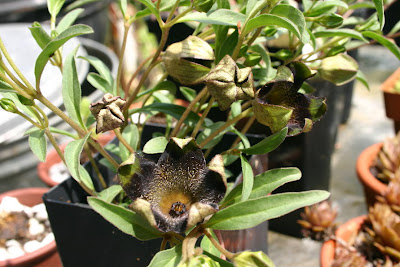 Imagine, if you can, a Stapelia trying to be a Fritillaria, and you’ll have a rough idea of what this plant suggests. It’s a South African asclepiad and evidently will eventually form a substantial caudex. It’s not a garden plant here, or at least I don’t expect it to be. When dormant it will probably endure sub-freezing conditions as long as it’s dry. I’ll keep it in the protected cold frame during the winter. Or maybe I’ll relent and keep it inside as a house plant.

The many uncertainties expressed in the preceding paragraph are the result of my almost complete lack of real knowledge about this plant. It came from Seneca Hill Perennials a few months ago; I took it out of the box, watered it, and a few weeks later took the picture above.
Posted by McWort at 9:43 PM

How It Grows said...