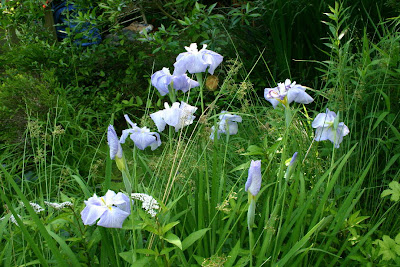 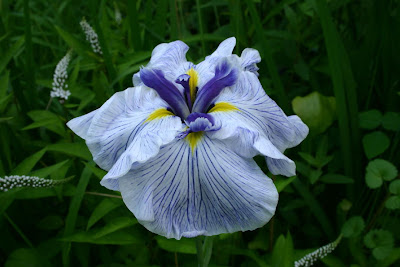 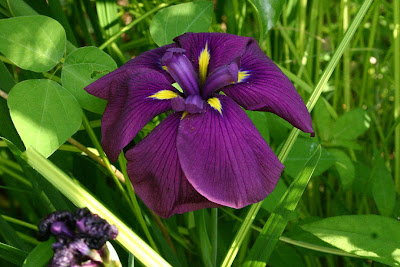 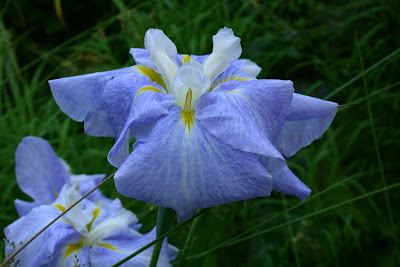 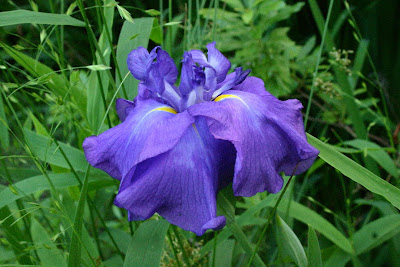 These amazing flowers really have to be seen to be believed. Although their color range is very limited, the individual flowers are sumptuous. Yet these huge flowers last only about two days. My plants came from a sale sponsored by one of the local iris groups over a decade ago. They came with names, but the labels were buried under the plants, and I’ve not been able to locate them since. I have a list of the names, but they don’t seem to match similarly named images on the web. In a sense, this only adds to the mystery surrounding these plants.


These grow in the bog trays at the edge of the pool. They have been carefree since the day they were planted, and over the years they have spread into clumps, some thick, some far ranging. In bloom the plants are between three and four feet high.

In old books these irises are called Iris kaempferi, newer books call them I. ensata. They do not require to be grown in water throughout the year. If they are not grown beside a pool or other wet place, it is traditional to flood the growing site as the budded scapes appear.

They are particularly beautiful at the waterside, especially if the water is alive with bright orange goldfish: the contrast between the bright, contrasting color and active movement of the fish on the one hand and the somber hues and staid poise of the irises on the other is enchanting.

If you want to enjoy them, drop what you are doing and get out to the garden: they will be gone for aonther year before you know it.
Posted by McWort at 6:38 PM