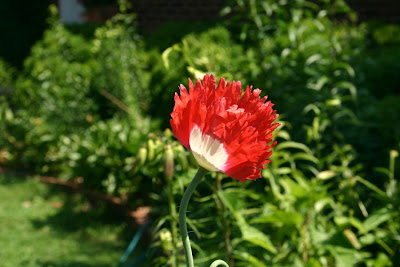 Of the many cultivated varieties of the bread-seed poppy (that is its polite name; in fact, they are cultivars of Papaver somniferum, the opium poppy) Danish Flag is a favorite. I first grew this decades ago, and when I saved the seed and planted it the next year I got some double-flowered forms in the same color pattern. The single flowered form shown above appears in an approximately three hundred and seventy year old painting by Jan Davidsz. de Heem which hangs in the National Gallery of Art. When the poppies are not blooming in the garden (and they make but a fleeting appearance), there is always de Heem's handsome Vase of Flowers to enjoy.