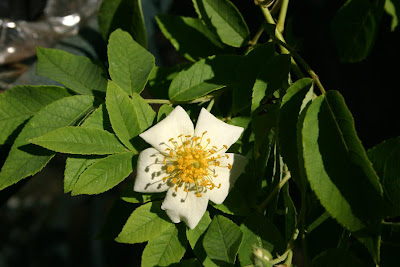 To those for whom appearance is everything, the rose you see in the image above is as homely and unremarkable as any. Yet to those who know the history of the roses it is one of the most important roses ever grown. This is the storied musk rose, Rosa moschata. In the early nineteenth century it revolutionized garden roses as one of the parents of the Noisettes and Tea-Noisettes. It caries one of the archetypal rose scents, said to be musk-like (and let’s be honest: how many of us really know the scent of genuine musk?). Whatever that scent is, it is remarkably strong and free on the air.

Another interesting characteristic of this rose is that it comes into bloom much later than most garden roses. My plants began to bloom this week, well after the season of the once-blooming garden roses.

Learn to close your eyes and give that other more primitive sense a chance to work its wonders.
Posted by McWort at 3:59 PM