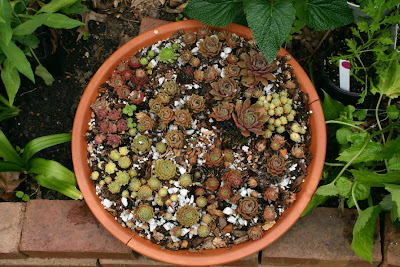 These otherwise cheery plants, whose botanical name, Sempervivum, is generally translated as "live forever", do not in fact always live up to that seemingly care free term. Lack of sun will do them in, and during the summer a lack of moisture evidently will, too. Their general ease of culture gives them the reputation as the sort of plants to give to children. Many serious gardeners turn their noses up at them. The somewhat similar plants of the genus Sedum often get the same treatment. Yet both have valuable contributions to make to our gardens.

Here you see a mix of un-named sorts happily grouped in a low terra cotta pot saucer. Working out satisfying color combinations with these plants is tricky because their colors change continually. Some have bright red tints earlier in the growing season, others have contrasting colors on each leaf. Yet when you see the same plants months later, it's hard to believe that you are looking at the same one. At first, I thought I would be very systematic and photograph all of my plants. They produce runners with little plants at the tips, and it's not unusual to find satellite plants detached from the main clump. That means that there are always plants in need of identification. A nice series of photos would solve that problem, wouldn't it? Well, as it turns out, to be useful  the photos would have to be made monthly.

Some new sempervivums arrived in the mail several weeks ago. The labels of four of them were loose in the box. I went to the grower's web site to try to identify the plants which lacked labels. The four plants without labels matched nothing on the web site - at least for now.
Posted by McWort at 4:17 PM

When I grew up on the Eastern Shore, of Virginia, we called them, "Hens and biddies".