A Colchicum of the Merendera sort 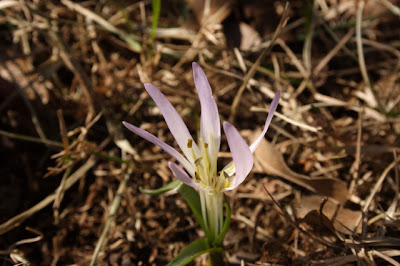 For most of the twentieth century the genera Colchcium and Merendera were treated as distinct by most botanists. The current trend is to call them all Colchicum. The one shown above came without a definite name but with the hint that it might be Merendera montana (as it was better known at the time).

Garden colchciums are best known as fall blooming plants, although in fact many bloom at the tail end of summer and only a few persist long into autumn. And there are forms which bloom in late winter or earliest spring.

These flowers have a peculiarity which you can just barely begin to make out in the image above. The tepals are separate right to the point where they are attached around the ovary underground. The wide, showy part of the tepal thins dramatically just below the point where the tepals flare to form what we see as the flower. This thin part is just about as long as the wider showy part. If you look at the image carefully, you can make out these thin parts of the tepals. They form a false tube, false in the sense that there in no tube above ground. And here's what more interesting: at the point where the tepals flare, there are little hooks which hold the tepals together to form a recognizable flower. If you gently unhook them, the tepals sprawl individually flat on the ground (because other than the little hooks they have no mutual attachment). There must be a pollination story responsible for this odd condition, but I don't know what it is.
Posted by McWort at 4:25 PM