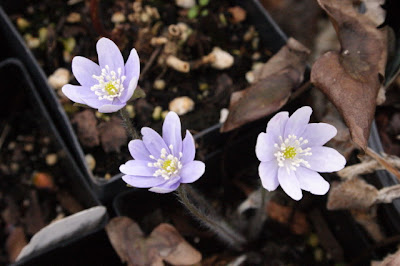 When my parents bought this house almost fifty years ago I was in my late teens and spent a lot of time exploring the local woodlands. My memories of the local flora from back in those days are, in many instances, all that remain of many plants. Native plants which were once so common as to rarely elicit notice are now rarely seen. Some plants have almost certainly been extirpated from the local woodlands. The reasons are various and now mostly widely known: deer in particular seem to have successfully Hoovered the forest floor in this neighborhood.

Back then there were two places where I could count on an early display of hepaticas. I don't think I've seen a hepatica in local woods in twenty or thirty years.

Is this impoverishment of our local flora important? The species in question, the ones we no longer see in the neighborhood, survive in abundance elsewhere. The local woodlands are probably largely second growth or more; before the deer reappeared, cows probably occupied the same niche and did as thorough a job. Even if we could get rid of the deer, there would still be a significant problem with human poachers. It might be grimly amusing to accompany a group of gardeners in a walk through our local woodlands and listen as they quote catalog prices for the remaining examples of our native plants. Surely that they are sold at all must nudge otherwise responsible gardeners into snitching a plant here and there rather than pay the going rate in the catalogs. Surely most of the plants sold in catalogs are plundered from national forests and other nominally protected sites.

Take a look at the prices for the trilliums in Tony Avent's catalog: wow, how's that for sticker shock? But you can buy those plants guilt free. They are not as expensive as you think: in the time it takes to raise a trillium from seed to bloom, someone might add an extra graduate degree or two, or watch a youngster grow from childhood into their early teens. Now you know why so many gardeners travel with an entrenching tool tucked away in the car trunk.

I don't have much if any hope for the local woodlands. They are beyond saving in my view. They are already lost, and any efforts at restoration will involve enough might-have-been fantasy to make the results laughable.  And then there is this insurmountable problem: even if you could  get rid of the deer and the invasive alien plants, you wouldn't be able to get rid of the people. We're the problem, and as long as we're around, the problem will be, too.

Now what in the world about hepaticas steered me in the direction of this little rant? I do miss the ones which once grew in the local woodlands, and for all I know they are still there, somewhere.

The one you see in the image above is one received from Ellen Hornig as Hepatica acutiloba "large type, blue fls". This is the first blue-flowered native hepatica I've ever seen. I also have several of the Japanese garden hepaticas. These have much more intense color, but the seemingly simple flowers have the sorts of little irregularities which characterize plants which long ago lost their innocence to long residence in the garden. And I have home-grown seedlings. In a few years I hope to have a short border of hepaticas displaying both the variations in flower color and leaf pattern. I might even allow in a multi-petaled form or two.

By the way: deer cropped the flowers shown in the image above the day after the photo was taken.

Email ThisBlogThis!Share to TwitterShare to FacebookShare to Pinterest
Labels: hepaticas