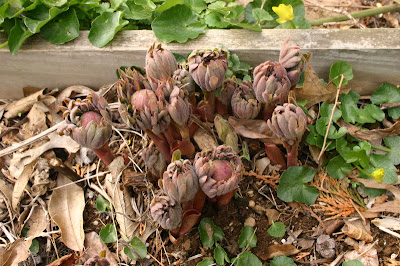 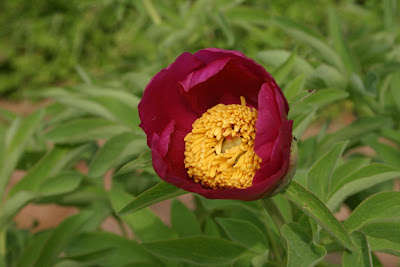 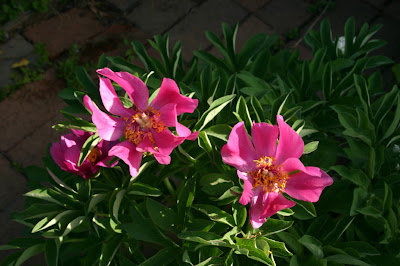 The botanical nomenclature of the wild peonies has been dicey for decades as each generation of new botanists takes yet another look at these plants and comes to different conclusions. With that in mind I should not have been surprised when, about forty years ago, I received a big healthy clump (said to have been imported from England) from a then well-known grower under the name Paeonia peregrina, a clump which when it flowered proved to be something else. That's the source of the annoyance here: the "something else" factor. The plant itself is big, healthy and beautiful. I've always been glad to have it. But what in the world is it? If it's an unhybridized peony of wild origin, it might be Paeonia arietina. But then it might not be. It might have been grown from garden seed of that species, and the seed might have been the result of an accidental hybridization. Or it might not have any connection with P. arietina at all.

Believe it or not, the two lower pictures above show the same plant in bloom, in bloom in different years when the growing conditions during peony season were very different. I'm sure many an armchair botanist might make them different species.

The top photo shows the new growth emerging bud-first from the ground. With this one you know where you stand bud-wise as soon as the new growth appears. This plant typically produces one big flower per stem. When the flowers first open and the dome of stamens is fresh it's a very beautiful sight.

Those are cool buds Jim. You need somebody doing Peony genetics to run the markers. Or not! It's a good plant whatever its name.