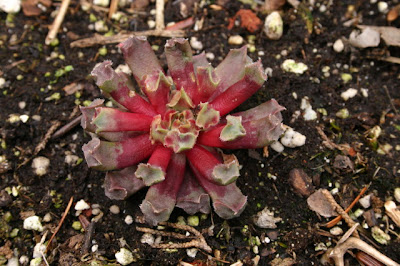 I know that there are those who take the attitude "if you can't grow anything else, there are always sedums and sempervivums". Some gardeners regard them as beginner's plants, hardly worth the consideration of serious gardeners - the sort of plant you would give to some kid in the neighborhood to nurture an interest in gardening. Others simply don't like the vaguely creepy, rubbery, fleshy leaves and dull, leaden colors. Our summers make their culture problematic. As it turns out, many sempervivums are not exactly care-free plants under our conditions. If you think you can plant them and forget them, you might have an unpleasant surprise coming.

And then, among gardeners who like to keep fastidious records,  there is the problem of the names. Pictures in catalogs or from on-line sources are not necessarily your friend when the time comes to match a nameless plant with a name: sempervivums are at their brightest and most colorful in the spring, but later most assume more quiet, duller tints - I've given up on trying to identify them during the summer when so many of them seem to look alike. The bright colors you see in the image above will fade during the summer.
Luckily there are a few which are so distinctive that you are not likely to confuse them with other varieties. The one shown above, 'Fame Montrose', is one such. The oddly truncated leaves are not unique among the garden forms, but you'll search a while before you find others like it.

I don't yet know the history of this cultivar, but the name 'Montrose' suggests that another famous garden might be in its background. Does anyone know?

And here's another idea: a bit of checking has revealed that this cultivar spontaneously reverts back and forth between a typical sempervivum form and the form shown above with the tubular, truncated leaves. Hmmmm...In the old days, teratological forms were also described as being monstrous.

For some additional commentary on this plant, see this:

Fame and Fame Monstrose are two different cultivars. Though Fame Monstrose is reported to be unstable - it produsces "normal" leaved chicks, too. I only have cultivar Fame.