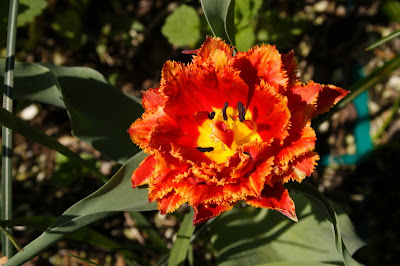 This is Tulipa 'Fringed Beauty'. The tomato-red, the cheese yellow and the anchovy-dark anthers have me jokingly thinking of it as the pizza tulip. It's a favorite here, as much for its appearance as for its rarity. It is still in commercial production but is not offered regularly - years will pass when it is not offered. So I try to take good care of my stock - the plant you see above has been in the garden for years.

This is an old tulip, but I don't know how old. It was already old when the Dutch finally got around to formally registering tulip varieties (as recently as the early 1930s!). It shows at least two mutations, the fringe effect and the double petals. It presumably arose (I'm guessing here) as a normal, six-petaled tulip raised from seed sometime in the nineteenth century or earlier. That tulip then presumably sported to a multipetaled tulip, and then to a fringed multipetaled tulip. Or maybe the fringed sport happened first. Other things about this tulip suggest that it might be much older than the guess above. For one thing, it produces very small bulbs - even the bulbs supplied by the commercial growers are small. It's a short and rather squat tulip - again, qualities seen in the oldest garden tulips.
Posted by McWort at 2:51 PM