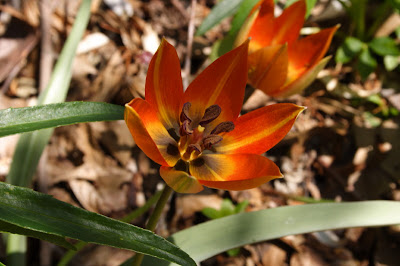 Tulipa whittallii is said to be a tetraploid form of the Tulipa orphanidea group. Perhaps the name should be formatted as Tulipa orphanidea 'Whittallii'. It honors the nineteenth century collector Edward Whittall. As far as I know, the plant was collected only once, and the cultivated stock is derived from the original collection.

The plant shown above has been in the garden for a long time, probably over thirty years. This is one of the tulips which spreads by underground runners terminated by yet more bulbs. After a few years, the initial planting becomes a diffuse group of scattered plants. Tulips which reproduce this way are a good choice for turning loose in the less managed parts of the garden.

Several years ago the topic of tulips which spread by underground runners came up on one of the on-line discussion groups. I mentioned this species and its long persistence in my garden. Someone wrote to me and asked for a starter bulb. I went out to the garden to dig one, but then had a thought which until then I had not considered. The plants in my garden grew in the shade of some deciduous magnolias, and although they had spread around a lot, they had not bloomed for years. In fact, I could remember planting several tulips known to spread, and now I could not be sure that the ones I was looking at were Tulipa whittallii. So for the next two years I fed the colony heavily, and this year it finally paid off: they are blooming again and revealing their identity. Someone will now be getting a surprise package in the mail in a few weeks.

Other tulips which grow this way are Tulipa clusiana and T. sylvestris, and I have seen both naturalized and thriving (but not always blooming freely) in local gardens.
Posted by McWort at 4:12 PM

This is a very informative post. Thanks for sharing.