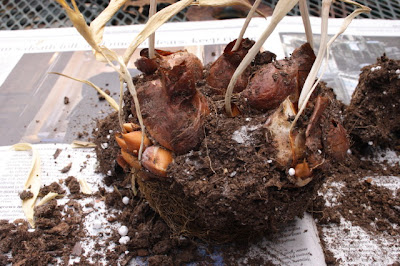 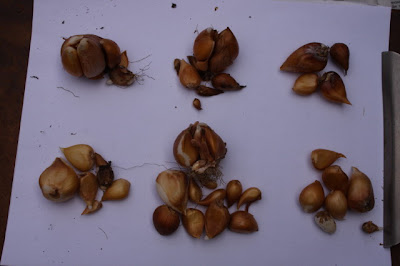 If you are an inexperienced bulb grower about to give up on tulips as garden plants in our climate, the two pictures above have something to teach you. Back in mid-February a pot of six blooming tulips was bought as a birthday gift for a friend. The tulips might have been watered once or twice while they still had blooms, but after that they probably went on a shelf and were forgotten. You might think that that would have been the end of them - after all, the tulips in the garden seem to disappear after blooming in spite of all you do for them. But when the pot was turned out, it was found that the six tulip bulbs had multiplied to nearly fifty bulbs! To be sure, not a one would likely bloom again without a year or two of bulking up. But with good culture, there is at least a chance that those six original bulbs might provide a couple of dozen flowers a few years down the road.

The old bulb growers had a saying: bulbs like to mature into a drought. The results you see above are an example of that. Why doesn't this happen in our gardens? When the tulips are maturing in our gardens in June, the soil is full of moisture and the soil temperature is rising. Those are great conditions for soil fungi, but terrible conditions for ripening tulips. Tulips planted in well drained raised beds sometimes persist for years, but tulips planted on the flat rarely do in this garden.

In our climate, if you want to experiment with keeping your tulips going for years, either plant them in raised beds or get them out of the ground before the soil warms up too much.
Posted by McWort at 5:20 PM

Email ThisBlogThis!Share to TwitterShare to FacebookShare to Pinterest
Labels: mature into a drought, tulip increase, tulips