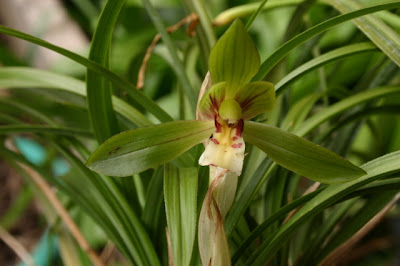 This lovely little bit of jade is Cymbidium goeringii, one of several greenish-flowered terrestrial orchids which have been celebrated for centuries in several southeastern Asian cultures as traditional spring flowers. As you can see, it's beautiful; and it's also sweetly fragrant. It's said to be hardy in USDA zone 7 (our zone), but I'm growing it in a cold frame for now. My friend Kevin who lives a bit north and east of here is growing it out in the open, and when I emailed him a few weeks ago he said things looked fine there (although his plant was not in bud yet). Although north of here, he's closer to the bay and at a lower elevation - and so his garden might be milder than this one.
The label which came with my plant indicated that the plant was a Japanese form of the species. Elsewhere I read that the Japanese forms are less likely to be well scented than the Chinese forms. I'll keep my eyes open for plants of Chinese provenance.
Posted by McWort at 3:54 PM

Your plant looks beautiful. I was wondering what do you mean by growing on a "cold frame". I also have a cymbidium. It did survive the Winter inside and I would like to see flowers one day. I live in Frederick, MD

Ludisia, a cold frame is simply a rectangular frame of wood over which is placed a glass top. See here for more information: http://jimmckenney.com/a_protected_cold_frame.htm

Cymbidium goeringii is one of the most cold tolerant Cymbidium. The one you are growing might not survive the winter outside even in a well-protected cold frame.