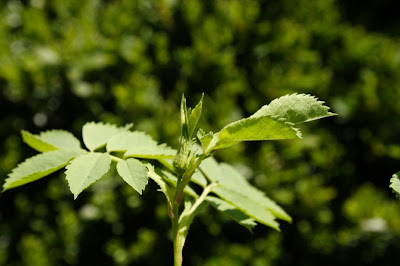 In a blog entry in April of 2010 I mentioned a rose of some historic importance which was once again growing in my garden after an absence of over twenty years:
http://mcwort.blogspot.com/2010/04/gardeners-need-patience.html

The rose in question is not a particularly vigorous sort, and it did not bloom last year (nor did I expect it to). But it did grow well, perhaps because finally I have it on its own roots. As it began to leaf out a few weeks ago I kept a very close watch on the new growth. The plant was growing very well, but there was no sign of flower buds developing - that was a big disappointment. The other day I took another look: there are flower buds, lots of them. With luck, I'll be posting an image of the flower in several weeks.

For now I'm not going to tell you what it is. Can any of you guess from the image above? I'm willing to guess that only well-read rosarians even know about this rose, and fewer have actually seen it in bloom. The only hint I'll give is that it is ancient (just how ancient no one knows) and was introduced to European gardens at the beginning of the seventeenth century. So if it goes on to bloom successfully here, it will be a big event for me. I still have a few good slides made in the late 1970s and early 1980s when I last grew this rose, but it will be great to get digital images.
Posted by McWort at 1:40 PM