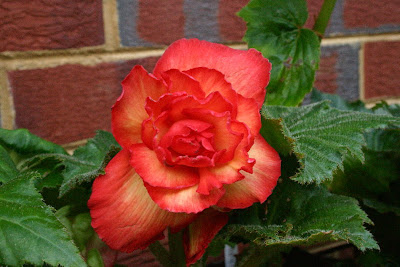 Although in a recent blog I said that the tuberous begonias do not thrive in our area, in doing so I was mostly repeating uninformed gossip. The prevailing attitude is that they do not do well here. But even in the older literature from eastern North America, there were those who stood up and said that although there are problems, these plants are well worth growing,
Over fifty years ago, in the Silver Spring neighborhood where I grew up, one of my neighbors grew tuberous begonias in a big way. He ordered the bulbs from California and planted them in a long (maybe 30’) bed at the back of his garden. I sometimes saw him in the woods gathering top soil for his begonia bed. As a youngster I took these begonias for granted: I had no idea that what he was doing successfully was the exception rather than the rule.
My own first trials with tuberous begonias came long after those times. For me, they were not good garden plants, and I soon lost interest in them. But occasionally I would see photographs (especially in older books) of tuberous begonias growing luxuriously in favored climates, and this would bring on another wave of temptation.
It happened again this year: I saw picotee flowered tuberous begonias illustrated in one of the catalogs. Actually, I had been noticing them for several years. And by then I had also dreamed up some schemes which might make their successful cultivation possible here. So I ordered a half dozen earlier this year, and the first of them have been blooming for weeks.
So far they look great. And they are beginning to bloom freely.
Am I counting my chickens before they hatch? Is there some serious tuberous begonia problem in my future? We’ll see: but for now, enjoy the image above. With luck, there will be many more in the weeks ahead.
Posted by McWort at 9:21 PM