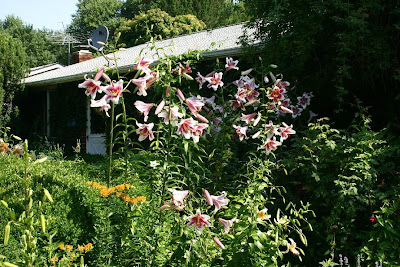 Those of you who follow this blog no doubt noticed that June was a lean month for entries. There is a reason: lilies. That is, lilies and the lily shows. Lilies bloom here in abundance and variety from early June (sometimes late May) into the earliest days of August. There are two big peaks: the first happens around the summer solstice; the second about two weeks later. We are in the throes of the second peak now: this is when the most magnificent and staggeringly beautiful lilies bloom in this garden.

I'm happy to say I've been growing lilies for over a half century, and it's been a half century marked by continual improvement in the quality and health of our garden lilies. Modern lilies show characteristics which only a few decades ago occurred mostly in our dreams. And if you are the sort of lily grower for whom bigger is always better, then you are a happy lily grower indeed. Hybridizers have successfully combined the size, fragrance and form of some of the largest flowered wild lilies with the ease of culture of some of the most garden-reliable lilies. Now anyone with sun and well drained soil can grow spectacular lilies, reliable lilies which return year after year.
Most of the lilies in the image above are the imposing cultivar 'Silk Road'. One stands under these lilies and looks up at the inflorescence.
Posted by McWort at 1:17 PM