Why didn’t I already know this? 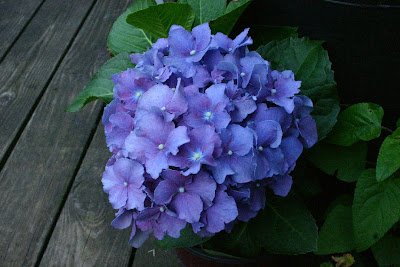 A while back I was having a discussion with a gardening friend about the specialized requirements of certain plants. The conversation wandered into the realm of those plants which require acidic conditions. And then my friend dropped the bomb: in response to my complaint about the sometimes indifferent results I get with these plants, he pointed out that the local tap water had a neutral pH. Every time I watered a bed carefully prepared for acid loving plants, I was unintentionally raising the pH in the bed.

I noticed an interesting demonstration of this phenomenon lately. Several months ago I bought a plant of Hydrangea macrophylla ‘Forever and Ever Blue’ which had a brilliant blue inflorescence when I purchased it. That inflorescence faded and was removed. A new one began to develop recently. The new one is not brilliant blue: it’s a sort of purplish blue. I attribute this change to the influence of our tap water.

We Americans butcher this word hydrangea. It's commonly pronounced as a three syllable word: high-DRAN-ja. To begin with, it's a four syllable word. If you follow the traditional rules for the pronunciation of Latinized Greek, the stress is on the ge: hy-dran-GE-a. The y is pronounced like the e in hero, and the ge is pronounced gay. Now when was the last time you heard that?
The upper image (taken May 10) shows the inflorescence as purchased; the lower one (taken July 6) shows the influence of our local tap water.
Posted by McWort at 7:53 PM

Email ThisBlogThis!Share to TwitterShare to FacebookShare to Pinterest
Labels: Hydrangea macrophylla 'Forever and Ever Blue', pH of tap water