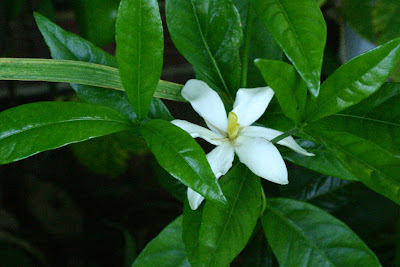 I grew up in a neighborhood where there were several keen gardeners, the sort of gardeners who were always trying something new and edgy. I remember seeing Phygelius capensis in one garden, and in that same garden there was an ongoing effort to keep a gardenia alive from year to year. It's long been known that gardenias are marginally hardy in our area: skillful mulching and covering will sometimes bring the florist's gardenia through even our winters.

I wonder what those gardeners from fifty years ago would think of the hardy gardenias we now have? There are several of these making the rounds; the best known name is 'Kleim's Hardy'. The one shown above is 'Shooting Star'. The flowers of this cultivar and those of 'Kleim's Hardy' are similar; 'Shooting Star' seems to be a more vigorous, taller plant.

You won't mistake the blooms of these plants for those of the florist's gardenia. These hardy sorts have smaller flowers, and the flowers have only five petals. But they have the luscious gardenia fragrance in abundance, and that earns them a place in this garden. They also set fruit, although I have not tested the seed to see if it is viable.
Posted by McWort at 1:02 PM