A new begonia on the block 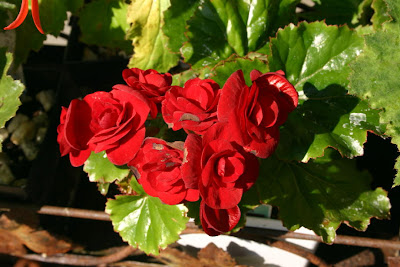 That the large-flowered tuberous begonias do not thrive in our climate is a major disappointment. The so-called Non-Stop hybrids are said by some to be more easily grown, but I don’t see them much in local gardens. Local shops sell them in the spring, and they sometimes turn up in summer bedding schemes.

This year Wayne spotted some begonias in a street-side planting down in the commercial part of nearby Bethesda, Maryland. When he described them to me on the phone, I assumed that they were Non-Stop begonias. He Googled Non-Stop and decided that what he saw was a bit different; in particular, the leaves were less pointed and more rounded. That sounded to me more like one of the Rieger or Hyemalis hybrids. He Googled these and decided that while the leaves were more like those he saw, the flower colors were different.

I was puzzled. As it turned out, I had been admiring some begonias in a neighbor’s garden recently, all the while assuming that they were Non-Stop hybrids. When I showed these to Wayne by flashlight one night while walking Biscuit, the owner of the garden suddenly appeared out of nowhere to see what was going on. Luckily, I knew him well, although I suspect that he was not sure he was not interrupting a begonia-napping.

We could see that they were not Non-Stop begonias, but what were they? The owner of the plants we saw did not have a name for them. A few days later I talked to his lawn and garden man to see if he knew the name: no luck there, either.

It was time to go for professional help. I asked about begonias at one of the big garden centers. Finally, someone who might know about them was located. He knew about the Hyemalis Hybrids and took me over to see a handsome display of these. When I told him that we were getting closer but had still not found the right plant, he mentioned that earlier in the season they had been selling some bedding begonias which looked a bit like the Hyemalis Hybrids. We went searching for these and finally found some mixed in among some Non-Stop begonias. At last I had a name: Solenia Begonias.

I purchased two and headed home. A quick Google search turned up plenty of information although not enough. For instance, how sun tolerant are these plants? Will they perform well throughout our summers? And are they tuberous or not? Later in the year I’ll post the results I get here.
Wayne now has three of them (pale yellow, light red and dark red) and I’ve got one (the dark red, a really beautiful color called Velvet Red). If these turn out to be good garden or pot plants here, they will be a valuable addition to our summer garden flora.
Posted by McWort at 12:12 PM