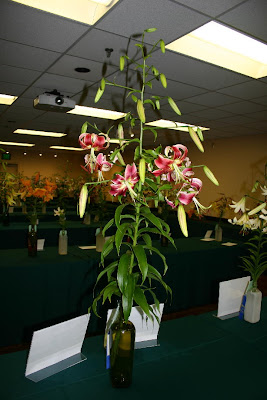 What for me was the last of three lily shows this year took place yesterday and today at Longwood Gardens in Pennsylvania. This is the show sponsored by the Mid-Atlantic Lily Society. Off and on for the last twenty-five years I’ve participated in these shows, usually as a judge and sometimes as an exhibitor. This year I was there in both capacities. I helped judge the early part of the judging, and it was a show marked by the generally high quality of the stems. We awarded one first place ribbon after another in class after class. And then I had to step out because I had a stem in the section being judged.

When I returned to the exhibition hall about twenty minutes later, I had a very nice surprise waiting for me: the stem I brought to the show won the Longwood Award for Best Stem in Show. Although there will be lilies blooming in the garden for several more weeks, it’s hard to top that as a climax for lily season 2009!
Posted by McWort at 7:24 PM