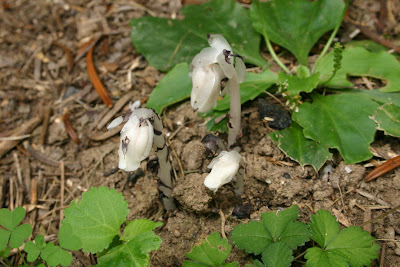 Because this is a gardening blog, you might be surprised to see an entry about a plant which is, in most usual senses, not in cultivation.

Yet in a sense, this one is.

For years there has been a profuse annual fruiting of a basidiomycete fungus of the genus Russula along one side of our house. This is a site which has been lawn for the last fifty years. Until recently, I had assumed that the Russula were parasitizing two Pinus palustris which grew nearby. However, the pines were removed two years ago, and the Russula persist. The only conifers nearby are a huge old Cephalotaxus and some garden yews. So perhaps one of those is serving as the host plant for the Russula.

About two weeks ago I had a huge surprise: a spot of white caught my eye near the Cephalotaxus. As I focused in on this, I could hardly believe my eyes: there was a clump of Indian pipe, Monotropa uniflora, emerging from the ground.

I’ve known this plant from childhood: its flowering was an annual event in a pine woods near my home. Back then, the plant was thought to be a saprophyte (from the classical Greek word for rot; the word sepsis is derived from a related word.) The modern take on this is even more interesting. Although Monotropa uniflora is a higher plant (in fact, it is placed in the same botanical family as azaleas and blueberries) it has no chlorophyll and is a parasite. A parasite on what? As it turns out, it’s a parasite on fungi of the family Russulaceae.

Other than planting the likely conifer host, I had nothing to do with this. In the distant past I had scattered Monotropa seed in the garden, but not as far as I remember anywhere near the plant now blooming.
Posted by McWort at 1:36 PM